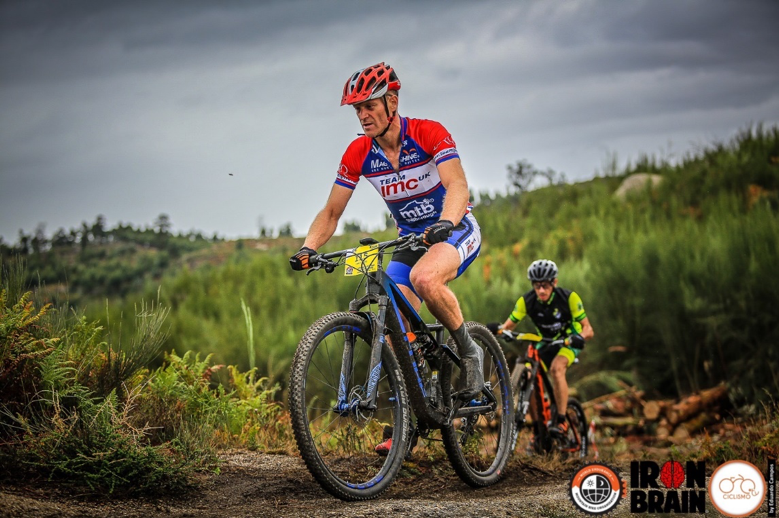 Flying to Portugal for European 24hr Championships brought many new experiences including flying with a bike in tow and racing abroad. Limited time off from work meant I flew in Friday lunchtime and got to the venue late afternoon to get the bike rebuilt and kit sorted. I went out for lap of the course rather late in the day, which in hindsight was a mistake, it was getting dark and the local kids I had caused a little mischief by moving the route signage. Getting lost and going about 6 miles out of my way wasn’t the most ideal preparation the night before the race, my L2 leadership skills came to the fore and I found my way back along the road, trying to take it as easy as possible whilst also being aware of the failing light.

Enjoying the practice lap in the sun, until the signs disappeared…..

A more relaxed evening followed with fellow Team JMC rider David Gobby, and our respective pits crews of Ron and Craig. I never get a good night’s sleep before a 24 hr race and the luxury of hotel (over the usual roughing it in a tent) didn’t make any difference. I was up bright and early and raring to go, and after breakfast headed down to the pit area a few hours before the start. 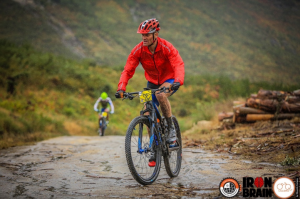 Riders seemed to gather at the start all of a sudden, and I ended up towards the back as the race began, there were a lot of team riders so letting them go off quick was maybe not a bad thing. The start of the first lap took you down the road to a narrow 2 planks of wood ditch crossing, the rain had begun by then and the bridge became a huge backlog as riders seemed to want to push over it, wet woods and XC clipless shoes don’t have much friction between them. A long queue causing a several minute delay as we each crossed in turn caused much annoyance. I was soon on my way and found some climbs to spread the field and make up some time, maybe pushing too much to regain a lost time, would I pay for that later on??

It wasn’t long before the rain really set it and became quite torrential at times to say the least, but still warm enough at this stage . It was after about 4 hours I hit my first wall, I usually have a ‘moment’ early on so I wasn’t too alarmed, took on a bit more energy and got through it, putting out relatively consistent laps. However, worryingly after maybe another few hours I hit the wall again. I was soaked by this point, so a longer stop to change clothes seemed to temporarily do the trick. The rain had really come down, the trails had turned to rivers and deep puddles which you couldn’t really avoid where now strewn across the course. Traction was still good, the granite geology held up well and the course remained fast. 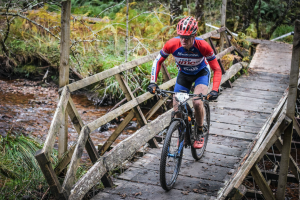 Then came the rain…..

Just after midnight I had a really bad moment again, having nearly an hour off the bike to try and pull myself round, something just didn’t seem right, these repetitive hit the wall moments I hadn’t really experienced before. The legs felt good, the climbs felt good it was just a lack of energy to push on and severe tiredness.

I pushed on through the night, a time when usually make hay, and to some extent I did make up some ground, others had fallen by the wayside and I just about keep going albeit at a slower pace than usual, but at 4am (ish) I couldn’t take any more. Was it race over………?

I’d been off the bike a couple of hours, my teammate David had also started to struggle, he came in the pits in a daze. He was doing well in 3rd place in category, I was about 7th in mine having not ridden in about 2 hours. I knew David could keep that place if he could get himself back out there. By then I had got dry and warm, so decided to throw on my merino base layers, waterproof shorts and jacket (was it really September in Portugal?), and I dragged myself and David back out there. I managed another 3 or so laps dragged myself up to 6th, with David secured his podium placing. This is where being part of a team really pays off, for both of us supporting each other on this occasion, riding the first lap back out there together.

In the end I did feel like I’d achieved something, I raced abroad on a brutal course, had some awful moments, but dug deep and got back out there again and again. It was tough and I learnt a lot about myself and my riding. I’d had a stressful few weeks with contemplating changing jobs with little quality sleep in the lead up, rushing over there at the last minute and then getting lost on the practice lap wasn’t the most ideal preparation either. 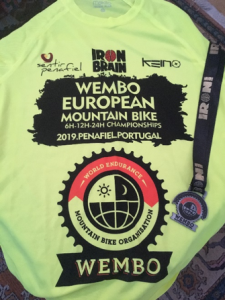 A year ago, I wouldn’t have dreamt of a 6th place finish in a European Championships, but was somewhat left wondering where a more usual solid performance could have taken me. It was time to chill enjoy my last night in Portugal and have a well-earned beer and think about where to go from here. All in all, I’d ridden 134 miles and climbed 21,000ft in 20 hours, not a bad weekends riding.

A big thanks to all my supporters and sponsors; Jon Fearne at E3 Coaching (@e3coach), Team JMC (@teamjmc), Magicshine lighting for providing reliable lights with plenty of spare batteries (@magicshinelighting, Torq Fitness(@torqfitness, #TORQFuelled), MTB Guisborough (@mtbguisborough) and above all others Fiona, Jacob and Hannah.

The UK Championships had been in my thoughts, but I wanted to see how the Euros went first. After my disappointment of Portugal, I felt good within a few days, confirming what I already knew that for whatever reason I hadn’t been able to give it my all over there.

I spoke with my coach Jon at E3 Coaching and decide we’d plan for Fort William but hold off any booking until nearer the time. No hard training regime was required, just recover initially followed by sufficient miles to sustain my fitness. I did a lot of soul search during those hard laps in Portugal, and after a pep talk from my wife, Fiona I decided I had to install more fun into my riding. Within a week I’d rebuilt my singlespeed and made sure I got out riding at least once a week with my mates. If I was going to do this, a more relaxed attitude was going to prevail. I had four weeks between the events, many doubted I could get anywhere near fitness to be competitive in such a short space of time.

With about 10 days to go I took the plunge and booked myself as Solo in the UK 24hr MTB Championships in Fort William aka – Relentless, returning a course I knew well after three 10 under then Ben’s and the WEMBO World Champs in 2018. I had run out of holidays for the year, so up and down inside a weekend it was to be, and fortuitouslycame across a couple on a local ride who were travelling to race themselves and just happened to live around the corner from me.

So, Jo, Paul, Indie their border collie and I set off after work on the Friday arriving at precisely midnight. A quick unpack and I’d settled down to sleep in the five star offerings (aka Team JMC pit area) in my bike packing tent. After 6 hours good sleep and I was ready to race.

Steady off from the start 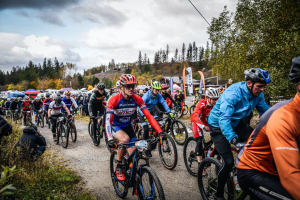 The start was good, with a small field the teams and the super-fast were on their way and after a pacey couple of laps I settled into a good rhythm. Things were going pretty well, coming in taking on more fuel and getting back out there. It rained a little, but nothing like Portugal and no real wind to speak of either – most unusual. However, about 7 hours in I really hit the wall, not tiredness so much, my legs were heavy, felt awful, taking on more energy didn’t help, and trying just plain water didn’t do much either.

I did another lap which wasn’t too far off my earlier pace, but still wasn’t in a good place physically. I decided to have a clothes change, take on a pot noodle and see how it went. I spoke to the team, got advice from Richey Rothwell, discussed whether it was too soon after Portugal, which we more or less concluded it was. Anyway, only you as rider can make these decisions, and I dragged myself back out and felt good, did another lap and felt great, the Rudd-mister was back and this time back for good.

Churing out those early laps

It was pretty much to plan after that, I’d been up to 3rd earlier in the race dropping down to 5/6th after my wobble, but was heartened to find out I was sitting 3rd 12 hours in, and into 2nd place soon after. I just did what I usually do and churn out the laps at a steady but consistent pace, I love night riding and at the end of October in Scotland there is plenty of darkness to go at, this is where races are won and lost. News from the pits was that 1st place was way off; he was a good few laps ahead of me but I was pulling away from my teammate Richie Scott who was lying 3rd.

Having some fun along the way!

That look of utter relief as I reach the finish line

The lead was out of reach, so knew I had to just keep going, look after myself and the bike, and second place would be mine. That’s what I duly did, with no real pressure I enjoyed the end of the race, I didn’t take any risks, I didn’t need to.

I missed not riding the last hour at Portugal, so even though I didn’t need to I put in an extra lap, this was ‘my lap’ on a course that whilst brutal but also one that I’d grown to love. I’d had two fourth places at Fort William in the past, but this time I’d broken that duck and I crossed the finish line as 2nd placed MVET in the UK 24hr MTB Championships, truly amazing. 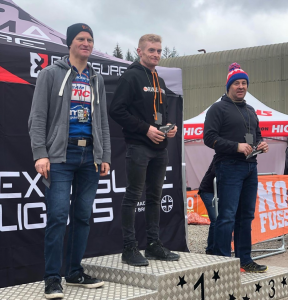 A big thanks to all my supporters and sponsors; Team JMC (@teamjmc) – especially Budge the pit support was immense, Jon Fearne at E3 Coaching (@e3coach), Magicshine lighting for providing reliable lights with plenty of spare batteries (@magicshinelighting), Torq Fitness (@torqfitness, #TORQFuelled), MTB Guisborough(@mtbguisborough), Indie, Jo and Paul Barnes (@barnsey_j) and above all others Fiona, Jacob and Hannah.