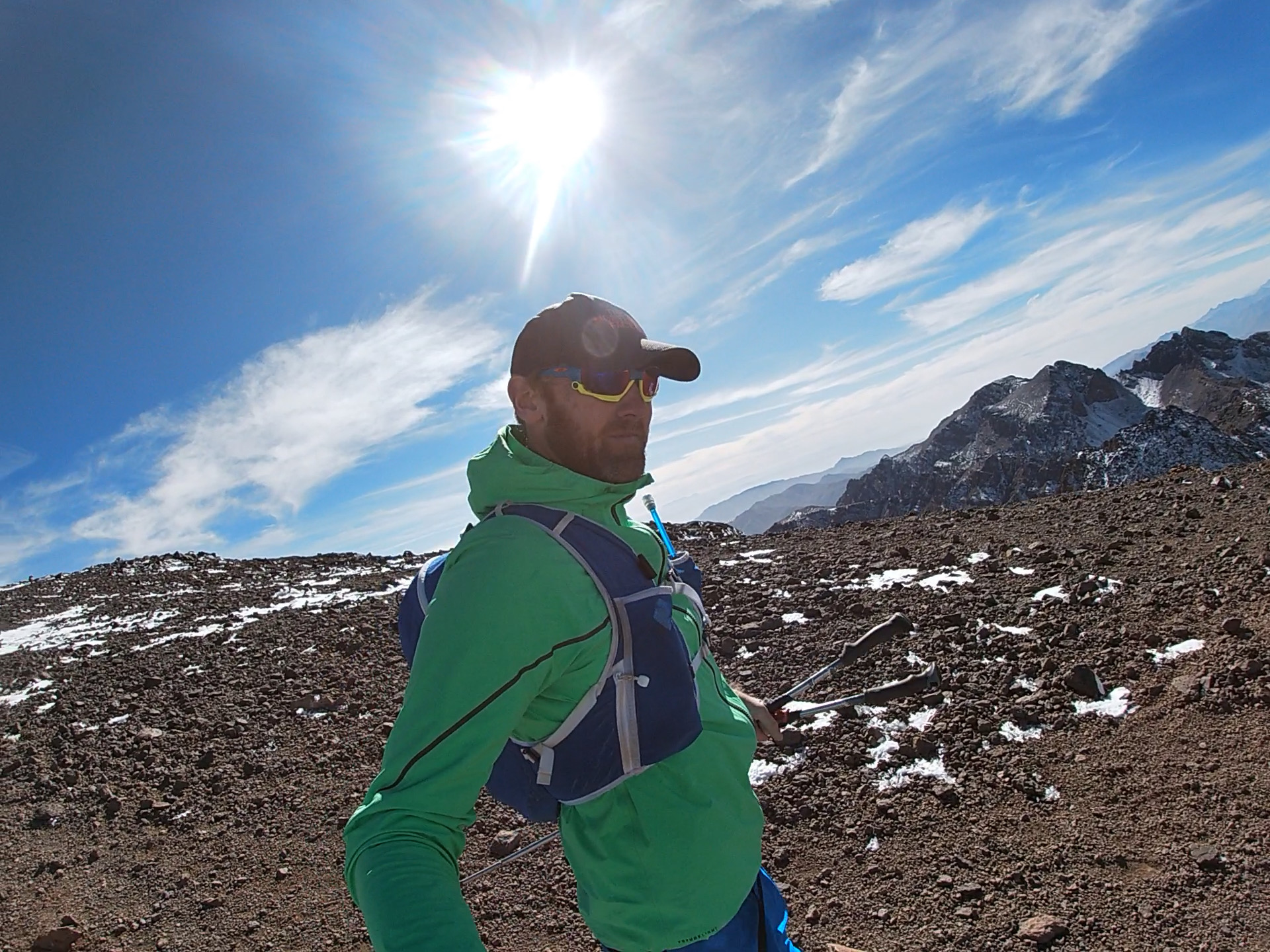 I’m sure I can’t be alone on this one?

You and your partner are looking for a short break or holiday and you just have to find a way to link in a great challenge or adventure.

So that’s what Morocco became for Lily and me. Lily had wanted to go for years and I had been around 17 years ago and loved the place, especially the Atlas Mountains.

My previous trip had been an organised trek to the summit of Mt Toubkal (4167m), with the trek being 3 days and then having a day either side in the beautiful Marrakech.

The goal was simple- we had 4 days away and on one of those days, I would attempt to run to the summit of Toubkal and back, with Imlil village being my start and finish point. Cogs turning away now- we were 2 months out and I had to get prepared. Living in the Alps meant I had already hit some great trail/mountain runs so I would now focus on a some longer local runs to finish my prep.

For me there was an added bonus, my son Bodhi was coming along. He had greeted me on my return from my first trip 17 years ago when he was only 6 months old and now almost 18, I was to share part of this adventure with him.

The taxi was booked, Marrakesh to the Imlil would be around 90-minute drive.

That night I went through my nutrition and kit one last time and then headed off to bed for an early night. So far so simple as the taxi arrives and we all pile in (Bodhi not the most enthusiastic about an early start).

The sunrise on the way to the mountains was amazing, so I just sat and soaked it all in with just a little worry about Lily and Bodhi having to spend the day in Imlil (not a very large village).  I had in my head that I’d like to complete the run and be back at Imlil village within 7hrs- this would be around 18 miles (9 up 9 down) and the amount of elevation gain and loss would be 2250m.  Why 7hrs? In my research the theme was anything near 7hrs was a good time. 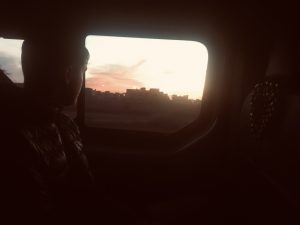 We get to Imlil and straight away we hit confusion. The police had put extra check points on the lower entry to the national park and so my guide was worried about me attempting to run it- whilst he was eventually happy to take me, my apparent unusual request to run the route had taken a lot of time for the village to get their heads round and we set off much later than intended.

It was a super cold start with heavy frost on the ground, but once moving through the valley I warmed up. A gentle gradient to start was much apricated and I found a rhythm quickly. I was also impressed at how well Musaf (my guide) was running, basically stay around 20m ahead- whilst he’d had clear reservations about our plan, his fitness levels clearly weren’t his concern!

It was not long till we started passing hikers with full packs and mules carrying kit. It felt great to be traveling so light and moving quickly (well relatively). Having done a few tests over time, travelling light and fast in the mountains always seems to win.

The other trekkers on the mountain definitely helped me to keep pace- their calls, reactions and surprise definitely gave me the boost to keep going, even if I did get called “mad” on more than one occasion! I was doing something cool and crazy… and I was totally loving it.

My completion target of 7hrs was still in the back of my mind and to help me keep sight of this, had set a few targets on the route. The major one of these was the refuge at 3200m, we arrived within 2hrs of leaving the village, with 967 vertical meters left to go (yep the hardest section). I topped up my water bottles and quickly dragged Musaf away from the other guides- I think he was hoping for a little social but I needed to keep the momentum going as I knew the next part was when the real work was needed. 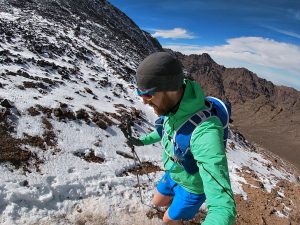 The run up to this point was very much lower alpine trail style, nothing technical, not crazy steep and so was home from home.

Entering the steep gully above the refuge, everything changed. I knew the end of November was just outside the normal hiking season and that it would be getting colder as we went up. I was beyond pleased at this point to have packed my mini run crampons, the steep ice-covered rock that lasted for 1 mile tested both my physical and mental strength! It’s at these moments when travelling light can feel a little more vulnerable. Obviously the pace slowed whilst I became accustomed to the new terrain, with Musaf’s super confident stride eventually rubbing off onto me- it enabled me to shake the negative away and just get on.

It’s crazy how in a brief moment, our minds can jump to all crazy out of control scenarios- this is why we must always work on our mental states in training as well as our physical. 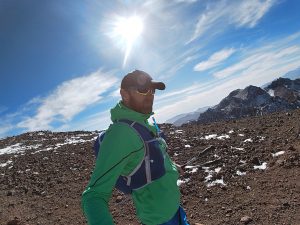 Once we were finally out of the gully, we were away from the ice and the gradient eased- I could run (of sorts) again.  The gully pops you out into a much nice landscape where you can see where you are heading, and this was a great help.

Having reached 3500m altitude, my pace was starting to take a hit. I could have done with a little more hydration but knew I would need some for the descent and so held back from downing the remaining fluid. I followed the zig zagging path across the more gentle slopes which brought me to the last summit section, Whilst it was a little steeper again, the Pyramid summit in clear sight gave my legs the little push they needed.

I reached the summit, greeted Musaf and shared a hug. Whilst I felt pleased with myself, the respect I felt for Musaf overrode this, especially after he tells me many time’s he has summited but never run it! Just amazing.

4hrs 14 minutes to the top of North Africa- I’m happy with that. Now to get down in 3hrs 46 minutes. 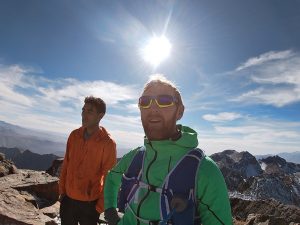 The gentle slopes just below the summit gave way to some amazing views across North Africa (one of my favourite summit views) and along with the more gentle gradient, gave good distraction to ease the legs back towards home.

The nice slope soon turned back into the icy gully.  Whilst my crampons were on straight away, I was much more cautious as fatigue was starting to creep in and I was in need of fluid from the refuge.  It felt like a really long time before we reached the steadier trail.

Once at the refuge, we got a great greeting from the staff (I had several emails with them about my plan) and they’d kindly prepared a small meal for Musaf and myself. I ate as quickly as I could- whilst I wanted to e respectful, I had my 7 hour time in mind and still had to fill my water bottles before heading off on my own for the last 10-11k back to the village.

It’s now at this point I know I had made it- I knew I was going to get safely back to the village but I was also so aware of the tiredness creeping into my legs, the once easy alpine style trails becoming more and more like tripping hazards with each step. My awareness of the time was filling my head- the 7 hour limit was getting closer and Lily and Bodhi were still waiting for me at Imlil. A few times (only a few) I considered forgetting the time and walking to rest a bit. But it was so close, I kept pushing and I arrived back at Imlil in 6hrs 55 minutes.

What a day! I was greeted by a happy Lily and Bodhi who had been having their own adventures with the locals and travelled back to Marrakesh updating them on my own day… 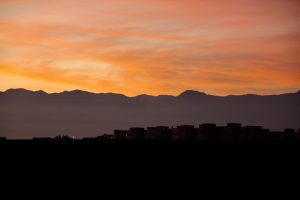 The North Face – all run kit and backpack (Charley) plus the amazing Future Light jacket- stayed on and felt so good.

Superfeet – best insoles ever!! No issues with my feet

Lily and Bodhi for being the best support crew ever

Musaf – for being a legend, so strong and so humble.

That Bad session that is Good by Jon Fearne

Age is but a number (interview with Legend Life After 40)

That moment of pause, when you soak up what you’

Something so pure and clean about the sudden cris

This week the family move to Scotland, it starts t

I could give a deep meaningful bit of text here ab

I think 2022 is the year of wild adventure challen

I can not wait to be living in the mountains again

For over 20 years I have worked getting people int

Take a pause and step back every once in a while,

A short session on the beautiful @specialized_uk #